We started out our July4th by heading to church. There was great music and a wonderful sermon. Ella moved classes room the older baby room to the young toddler room. Our sweet girl is growing up. I think she will have more fun in there though because she is so full of energy and really loves to play. After church we ate some leftover ribs that they smoked on the grill the day before and some baked beans I made. There were still delicious! 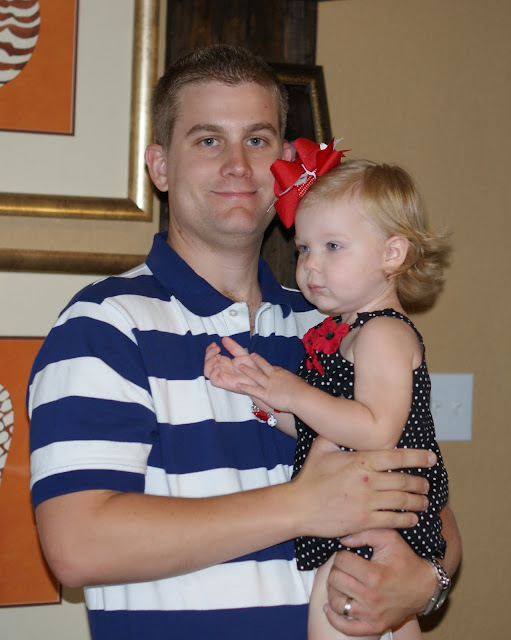 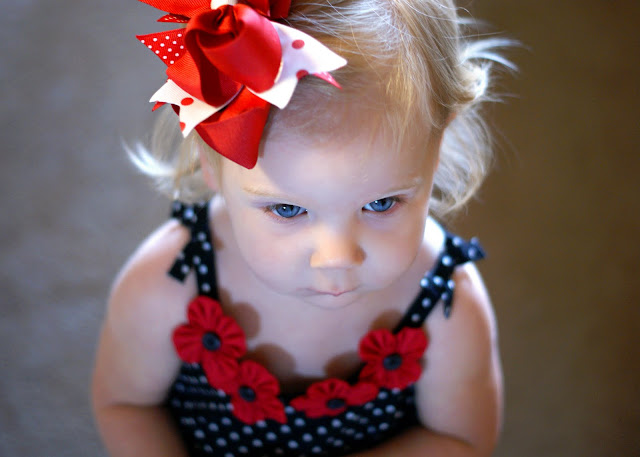 Of course I had to take a few pictures of Miss Thang all dressed up. We went shopping the other day and she just had to have this little dogie purse. The girl is obsessed with dogs and loves purses, so hat could be better than this! She hasn't let go of it since we bought it. In fact she had to hold it while the girl as checking us out at the store because she wasn't about to let go. 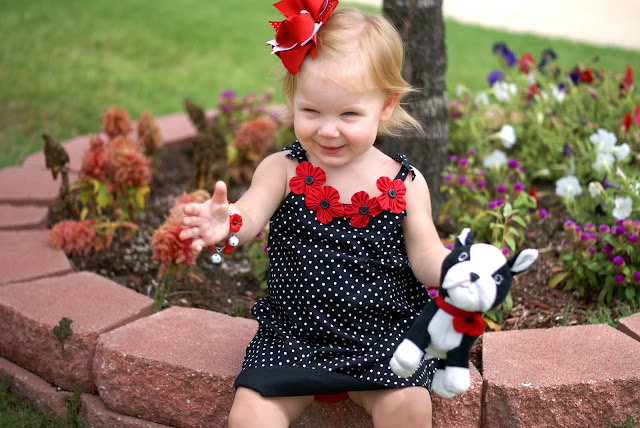 She has a matching bracelet too. I mean, accessories complete every outfit! =) 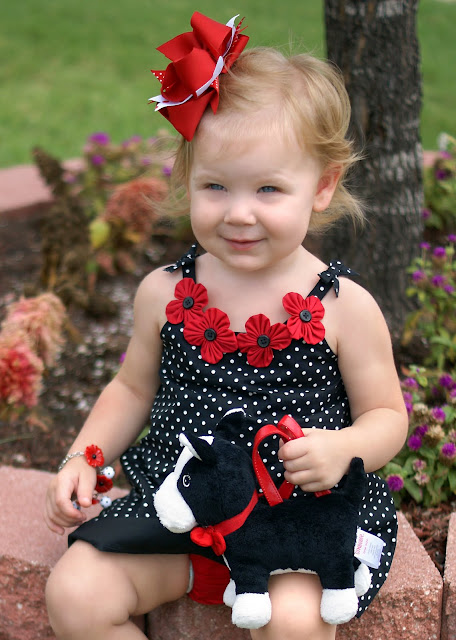 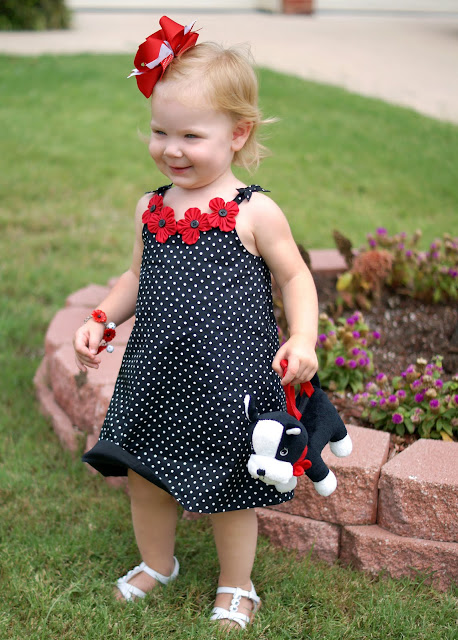 That night we planned on going to Harry Myers park in Rockwall to watch the fireworks with our friends, but the traffic was AWFUL getting into the park. What should be a 10 minute drive turned into about 40 minutes. I guess everyone planned on getting there at the same time we did. Instead we went past downtown because our friends had heard that people that actually went to the park last year got stuck in traffic for an hour and a half. NO THANKS! So, all of us met up and sat in a parking lot and let the kiddos play. I think it worked out a lot better this way anyways! 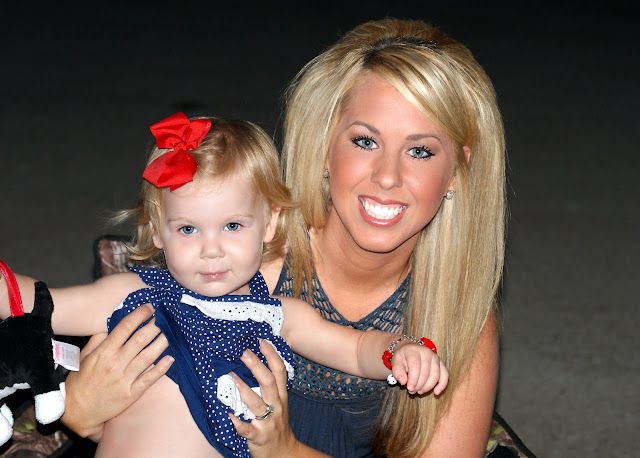 This is Gregory and he is about 4 months older than Ella. He is soooo cute! He just got his head shaved, but he did have long RED curls. I miss his curls, but this has got to be a lot cooler for the Texas Summer. These two were a hoot! They were hugging (of course with a little prompting) and being so sweet together. 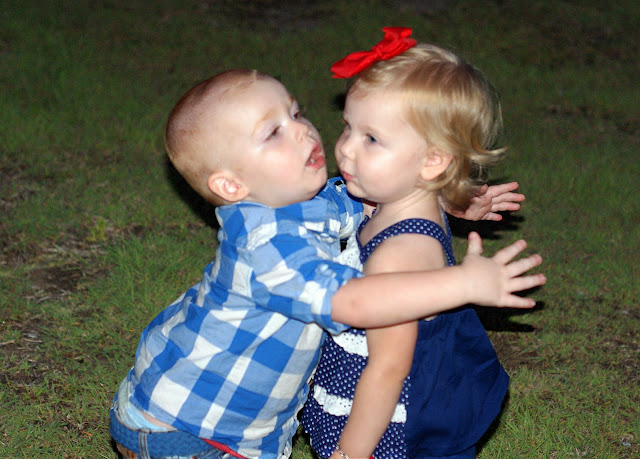 Ella was playing a little hard to get, but eventually she ended up chasing Gregory and trying to give him hugs. 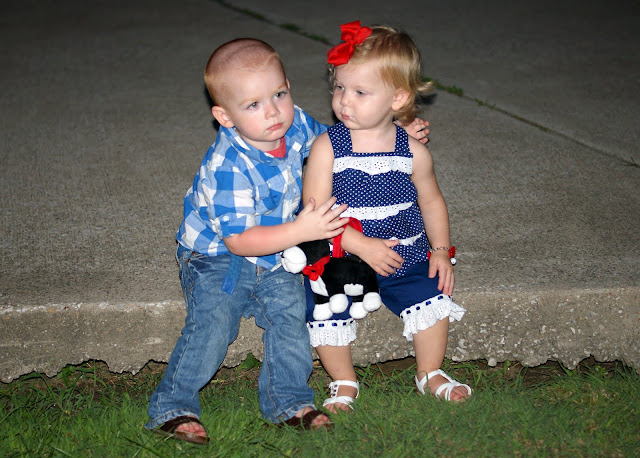 Gregory's dad, Brad, put the in the stroller and pushed them around for a while. I would say it was a successful first date! 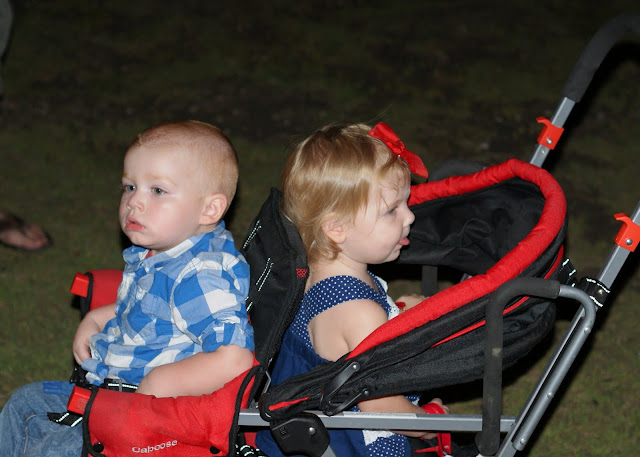 This is Gregory's sister, Addison. She was so good the entire time and just hung out on her blanket or with her Momma. 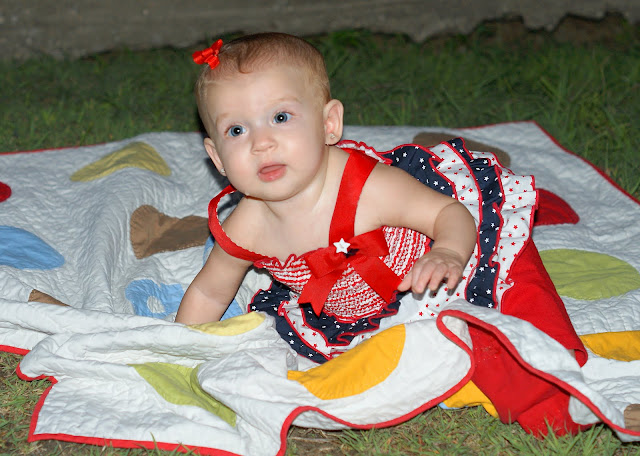 After the fireworks were over we headed to our Sunday School teacher's house for more fireworks. There were six or seven couples there and we all had such a good time. The boys mostly stayed outside and the girls were mostly inside. Ella wanted to be outside for a little while until someone lit some black cats and the loud noise kind of scared her, so we were inside the rest of the night. She and Gregory had toys spread out everywhere. We finally headed home around midnight and Ella was fast asleep in her carseat. She even stayed asleep as I carried her in, put her on the changing mat, and changed her clothes!

We had a great time and this morning Trey went and played golf with a few of the guys while Ella and I played here. I love long weekends!
Posted by The Calhoun Clique at 4:39 PM

really cute pictures! looks like you had a nice weekend

Love your pictures and I loved Ella's outfit last night. We had a great time too - we are blessed to have such great friends in our class! I heard Trey couldn't remember my name so I'll introduct myself next time :)

You are both dolls. Love the holiday dress. Too cute.