So this post is not so wordless, but it will have lots of pictures. Lets start with last Tuesday night when we babysat Hunter. Both chubby cheek kids, neither looking at the camera! 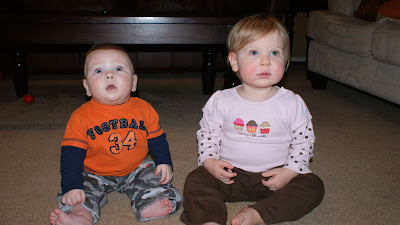 Wednesday night we went to church and after church Trey and I both got SO SICK! I think we had a stomach bug because we were both in the bathroom all night long and all day Thursday too. Praise the Lord Ella did not get it, but Trey and I weren't too much fun for her and didn't do a whole lot of entertaining her. She was such a trooped though and I am so thankful for such a good baby.
I loaded up and went to Wichita for my sister and Trey's Dad's birthday on Saturday. Trey didn't go because he still felt bad. I didn't take a single picture while I was there. I was still a little off and Ella just doesn't sleep good anywhere but her own bed, so I was tired and trying to keep up with her. We came home Sunday and Trey was better.
Monday we had a lazy day and stayed in out pajamas all day. Ella had a runny nose so I figured we would just stay home and play. Can you tell she is about to take off in this picture? I love the expression on her face. Like, ok mama come and get me! She loves to run! 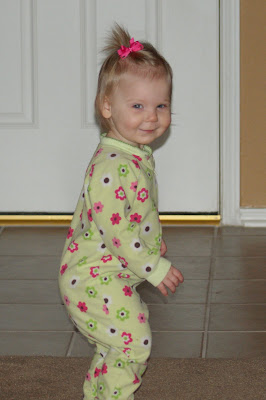 Her hair in the front is getting long and always pokes her in the eyes. She always wears a bow when we go out, but she does pull them out a lot of the time. So, I put in a little baby bow and told Trey to pick up some hair bands on his way home. She left in the little bow for a while before pulling it out. 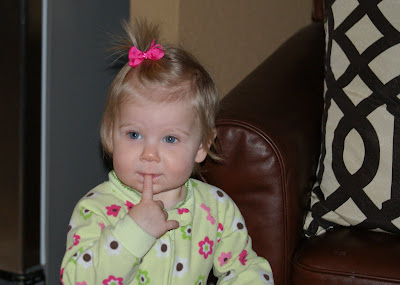 She loves this little rocking police motorcycle. She will just rock so hard I am afraid she is going to just go all the way back. She is getting to be such a big girl. It is so weird. It is like all of a sudden she went from baby to toddler. She is even starting to look less and less like a baby. 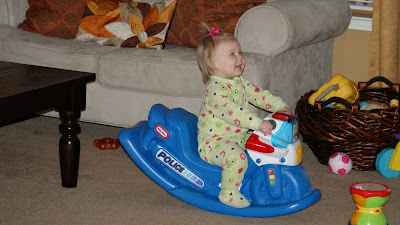 I think this is hysterical. I was bored on Tuesday when we woke up and just wanted to play with her hair. No, this look probably won't be repeated until she has more hair, I just had to do it and then I had to take pictures to show Dad. She is zoned in to Yo Gabba Gabba. Oh, that show is so weird, but she just loves it. It is the only show she will watch. I am glad though because I don't want her to watch a lot of TV, I would rather play with her. 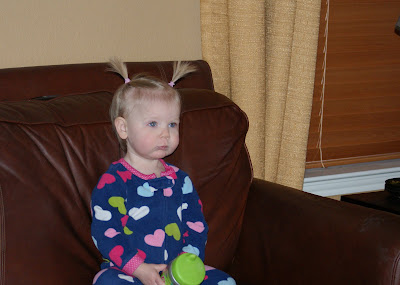 She couldn't even take her eyes off the TV to tell me to go get her more juice. She just held it out until I got the picture. 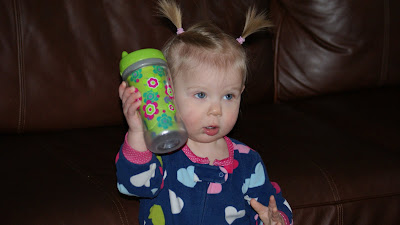 She also had a great time putting the box of building blocks on her head. 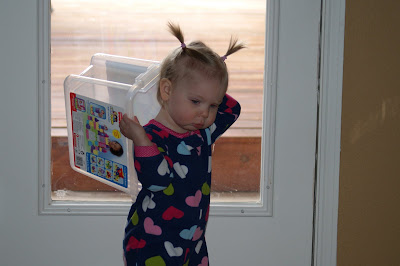 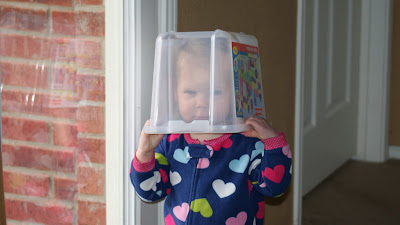 This morning I went to my Moms group and hopefully when she wakes up we are going to go shopping. Isn't my life so exciting?!?! It is a wonder that I don't have like a million readers with posts like these! Haha! I promise they will get better.
Posted by The Calhoun Clique at 12:48 PM

I love her hair! Sooooo cute!