A Little Bit Busy & A Lot of Lazy

It's not that I haven't wanted to post anything, it is just that I have been too lazy to upload the pictures. Just bein' honest!

Last weekend was my hubby's birthday so, yep, you guessed it...we went to Wichita. Seems like we have been going there so much lately and with Thanksgiving and Christmas coming up, we will be headed there again.


Anyways, back to the birthday. Friday night we hung out at my parents house and Trey got to open his presents from my parents. They got him some new boots and two pairs of jeans, which is exactly what he asked for. My mom fried some delicious fried chicken and we ate that and some birthday cake. Trey turned 27. He is a whopping 2-1/2 weeks younger than me.

Then we headed over to his parents house where we would be staying and he and his two best friends Justin, from The Veals, and James, from Baby Fouts, woke up early Saturday and Sunday morning to go duck hunting. Trey had such a good time! Saturday night we had his birthday celebration at his parents and James, Brooke, Blake and Justin all came over.
(I was such a horrible picture taker this weekend because I do not have any pictures of Trey, or me, or birthday stuff, or Justin!)

I do however have pictures of Ella...are you surprised?! This is her and Trey's dad hanging out outside waiting for the food to be ready. He Gigi (Trey's Grandmother) got her this little giraffe and she went to town chewing on the little guy. It is some 'big popular toy in France'. I saw something about it on TV and Gigi went to a baby boutique in Wichita to get it. Ella really likes it, so it was a good buy. 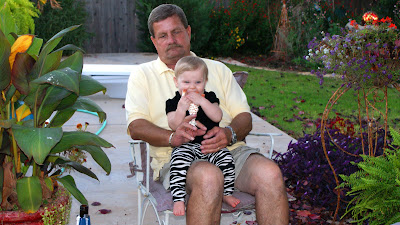 I told you she was serious about the giraffe. 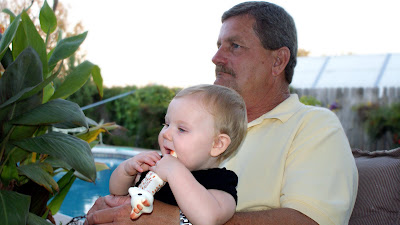 This is Blake. He is 4 months older that Ella. Isn't it funny how he is the only with any sort of a neck in this picture?! He and Ella are both what I like to call 'healthy'. 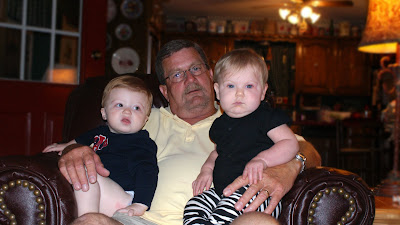 Everyone says he looks just like his Daddy, but he definitely has a lot of his Momma too. 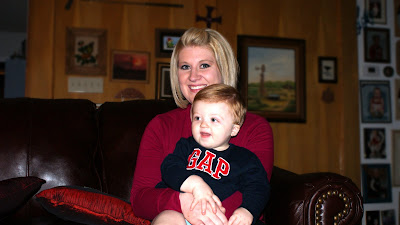 Blake wasn't too crazy about playing with Ella. I think it is because she can be a little aggressive! At one point Ella invaded Blake's personal space so he pushed her down, but my girl didn't just take it. She stood right back up and yanked Blake's pacifier out of his mouth and gave him a little swat. After that they got their issues worked out and had a good time. 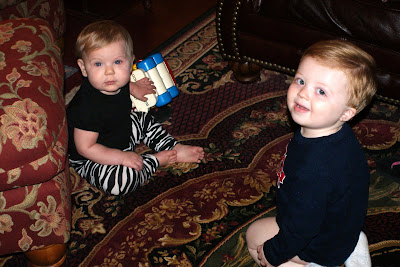 We missed not getting to see Joanna and Jaina, since they didn't make the trip with Justin. One day we will get the three kiddos together.

So, we had a good weekend and made it back to Dallas and I am always so worn out. Ella is not a big fan of sleeping anywhere but in her bed or in my arms, so neither of us got a lot of sleep. Don't worry though because we have definitely caught up on it this week!

Posted by The Calhoun Clique at 6:15 PM

Somebody gave Emerson that same giraffe! She hasn't opened it yet though!

hopefully one of these days Jaina and I will be able to come up there. My working situation isnt the best at the moment, I work really crazy hours. I hope all yall had a good time, Justin said he did! Tell Trey happy belated birthday!